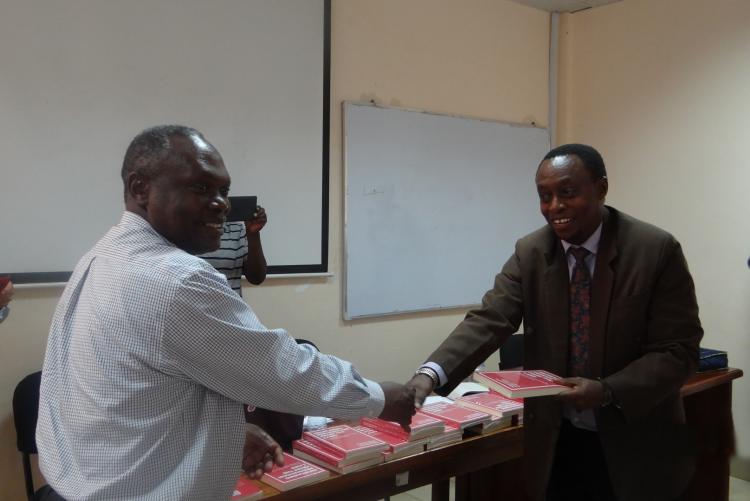 Prof. Emmanuel Mbiha (Left) handing a copy of INCREASING PRODUCTION FROM THE LAND: A Source Book on Agriculture for Teachers and Students in East Africa book to Dean of School of Agricultural Economics and Business Studies Dr. Adam Akyoo (Right)

This book will be used by Agricultural extension workers, Researchers, Managers, Teachers and Students in degree/diploma courses at Universities and Agricultural Training Institutes, Teachers of Agriculture/natural sciences in sec schools, Political leaders and farmers.

About the book (How it came to be written)

African agriculture faces major challenges with growing population pressure and the impact of climate change. Until now food production overall has broadly kept pace with demand. To maintain this impressive achievement, production from the land needs to be intensified, soil fertility must be enhanced, forests and water resources must be conserved, and land use practices must be sustainable over the long term.

This book shows what needs to be done, and points to how best to achieve this.

According to authors almost all the textbooks being used to teach about agriculture and rural development are from overseas or very out of date and many of them have little to say about Africa and they have little use of local case studies. Many of the foundations of teaching in the 1970s have been lost or de-emphasised – such as the many ways in which farmers can minimise the risks they run.

There is lack of clarity about some of the key issues, such as conservation agriculture, organic farming, genetic modification, and how best governments can intervene. There is also a tendency to write off small farms. Yet they will be with us for years to come and there is no other way of providing employment to replace them. Large farms also have parts to play. 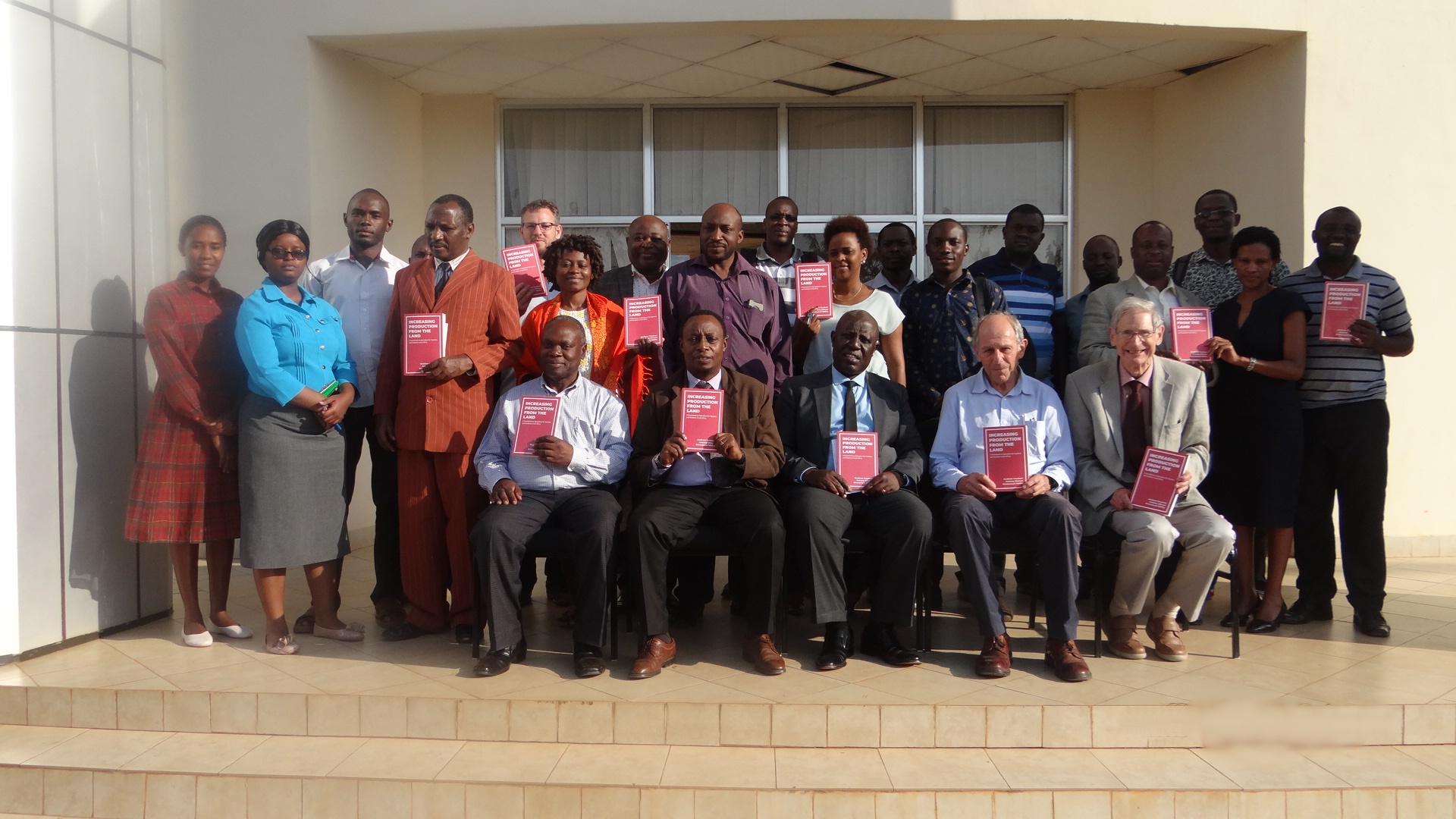 Contents of the book

This book is in the form of a textbook, It has many features that will make it useful to teachers as it includes Short chapters which start very simply, Avoidance of technical terms where possible, Each chapter can be read on its own, or as part of a developing argument, A summary at the start of each chapter, Each chapter ends with a local case study, References on open access on the internet, Essay or exam questions and an index to help readers find what they want.

The book starts with a brief guide to what plants and animals need to grow well, how farmers currently use the land, and the research that is being conducted on new agricultural technologies. A comparison is made of productivity on small and large farms, which demonstrates that, contrary to some suggestions, small farmers, properly serviced, can be as productive or even more productive than larger farms. Subsequent chapters discuss issues of land tenure, pastoralism, training, the importance of women farmers, access to finance, markets, value chains, and contract farming as a partnership between small-scale producers, processors and traders in agricultural products.

The final section of the book discusses whether a new “green revolution” is feasible or desirable for Africa. The potential risks and benefits of dependence on purchased agrochemicals, genetically modified varieties, and multinational seed and chemical companies are examined. A series of twelve broad policy proposals for achieving a sustainable agriculture sector is presented for consideration. Fifteen case studies illustrate the issues discussed in the book. Most of the examples are from East Africa, particularly Tanzania, but the principles addressed are relevant across the African continent.

Each chapter of the book includes references and suggestions for further reading, most of them freely available to anyone with internet access. A set of essay questions exploring the issues covered in each chapter is included, to provide practical help for students of agriculture and their teachers. 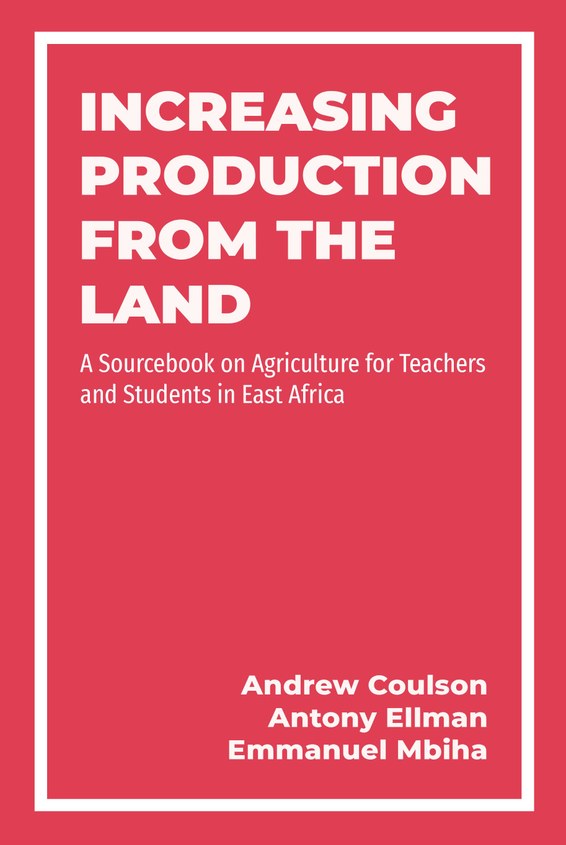 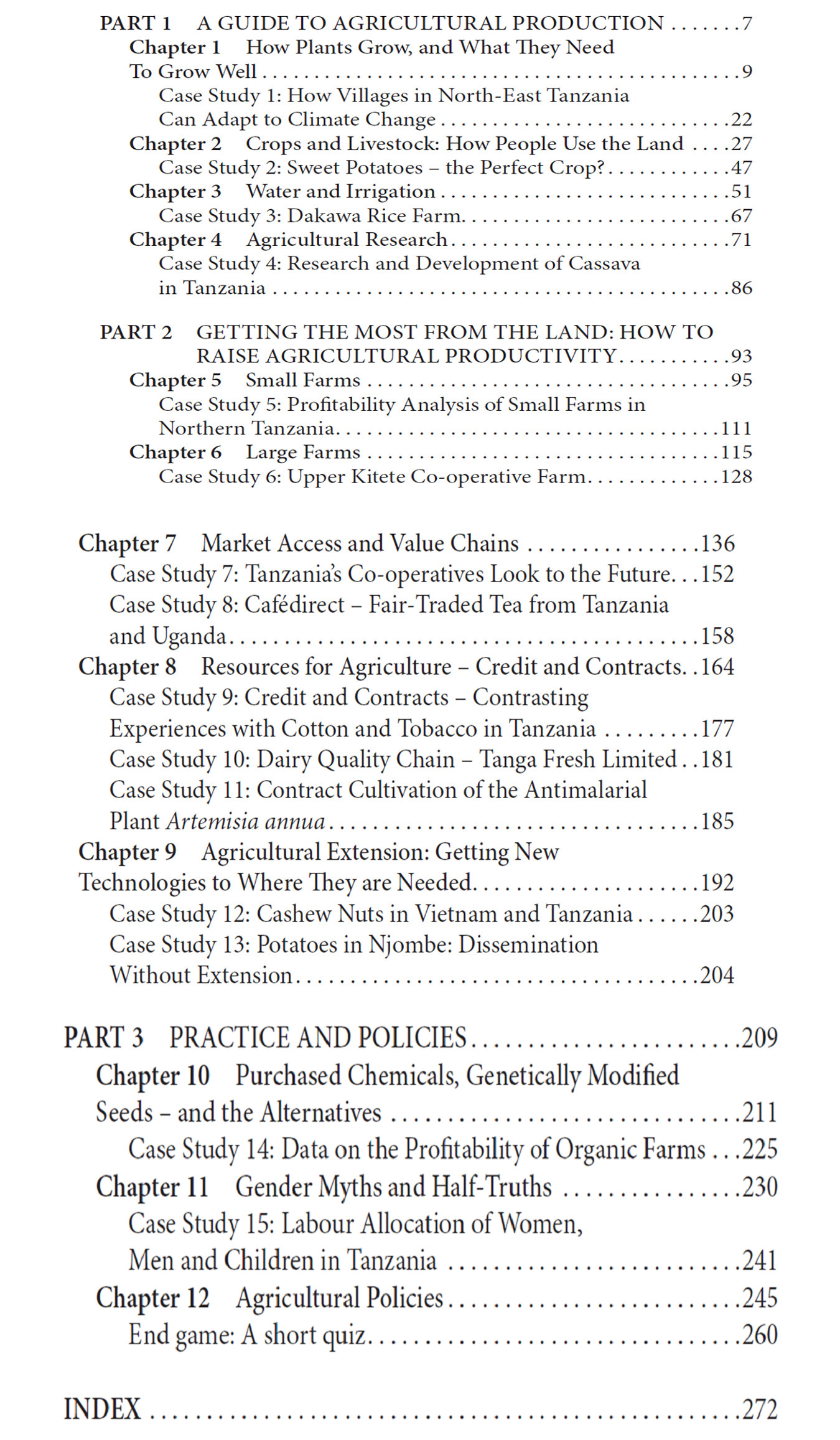 If you want to order your copy or you have Comments and suggestions write to Prof. Emmanuel Mbiha via mbiha@sua.ac.tz

Andrew Coulson worked as an economist in the Ministry of Agriculture, Food and Cooperatives in Dar es Salaam from 1967 – 1971 and taught economics at the University of Dar es Salaam from 1972 to 1976. He taught at the University of Bradford, England from 1976 to 1982, and at Birmingham University from 1984, where he specialized in matters relating to local government in the UK. Since 2006 he has made regular visits to Tanzania, and published a range of articles related to agriculture in Tanzania. A second edition of his book Tanzania: A Political Economy was published in 2013. He is current Chair of the UK branch of The Britain-Tanzania Society.

Antony Ellman is an agronomist and socio-economist. He first worked in Tanzania from 1962 to 1970, as manager of the co-operative farm at Upper Kitete, near Arusha, then as planner and advisor on smallholder development in the Ministry of Lands, Settlement and Rural Development based in Dar es Salaam, but working in every region of the country. He spent the next twenty five years doing similar work in Kenya, Ethiopia, Uganda, Sri Lanka and many other countries of Africa, Asia, South Pacific, and the Caribbean, before returning to Tanzania in the mid 1990s to establish a smallholder tea and forestry programme in the Usambara Mountains. Since then he has undertaken consultancies in Tanzania and elsewhere on conservation agriculture, fair trade and linking farmers to markets, particularly for the antimalarial plant Artemisia annua.