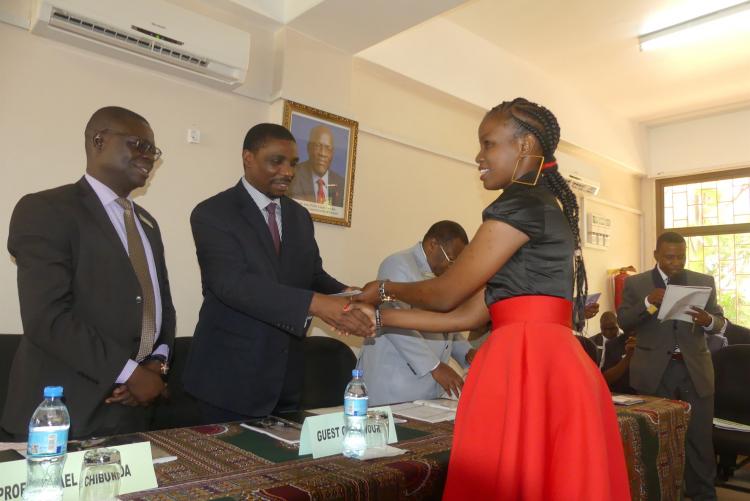 The event was officiated by Paymaster General and Permanent Secretary in the ministry of Finance and Planning Mr. Doto M. James and he was the one who presented certificates, academic prizes and trophy to all awardees

The awardee (students) moved forward by names to receive their certificates and prize starting with best students from various degree and non-degree programmes followed by leadership awards which was awarded to those who served in various capacity at Sokoine University of Agriculture’s  Students Organization (SUASO). After students, the Prizes and trophy was also given to Best Department/ College/School/ Directorate/ Institute & Centre in SUA Units Websites Ranking for the Year 2018 and last was the special prize for the best Agricultural Biotechnology Radio and TV presenter, 2018 award which was presented to Mr. Calvin Edward Gwabara. (Read all names and prizes here)

Earlier before, Sokoine University of Agriculture Vice Chancellor Prof. Raphael Chibunda expressed His appreciation to the wonderful support received from the prize sponsors which have helped to acknowledge the students accomplishments in this year and urged them to consider improving the prizes in the next time event.

The Annual General Meeting of the SUA Convocation

Soon after the end of the programme for prize giving ceremony, SUA Alumni Members conducted the 34th Annual General Meeting (AGM) of the SUA Convocation which started from around 12.00 pm, at the “Multipurpose Hall” Main Campus and later Convocation Luncheon at the same venue.

During this event a Distinguished Alumni award was awarded to Founder and Managing Director of Shambani Graduates Enterprises Limited, the maker of “Shambani Milk Products” Mr. Victor Mfinanga.

Shambani Graduates Enterprises Limited (SGE) was founded by three entrepreneurial Agribusiness graduates from Sokoine University of Agriculture (SUA) Mr Victor Mfinanga, Samweli Augustino Massawe and Flourent Nguma in 2003 after sawing an opportunity for small-scale farmers in the region to market their milk. The company is engaged in the collection, processing and marketing of milk and milk products in Morogoro, Dodoma, Dar es Salaam and other parts of Country.

Mr. Victor Mfinanga has served as the general manager of the company since 2003, when the enterprise started its operations, soon after graduating from Sokoine University of Agriculture in 2002 with BSc. Agricultural Economics and Agribusiness.

The establishment of Shambani Graduates Enterprises Limited (SGE) was inspired by entrepreneurship courses while pursuing their BSc. Agricultural Economics and Agribusiness degrees at Sokoine University of Agriculture between 1999 and 2002. After observing an opportunity in the dairy sector they came up with the idea of establishing a milk processing plant.

At the beginning (October 2003), the SGE’s milk processing business started with one milk supplier; at a processing capacity of 30 litres of milk per day; Produced only one product sold in Ngerengere village with all operations run by founders only.

Currently, the SGE’s dairy business has more than 100 milk suppliers, and is processing an average of 1,300 litres per day to produce five (5) different milk products available in Morogoro, Dodoma and Parts of Dar es Salaam City. The SGE has also offered direct employment to 21 people of whom six (6) are university graduates from Sokoine University of Agriculture

Mr Mfinanga as the CEO of Shambani Graduates Enterprises Limited (SGE) has demonstrated the capacity in exercising the will of the SGE in attaining several achievements including establishment of the brand new Milk Processing Factory which is in line with the TDV (2025) vying for attaining a middle industrialised economy.

Having founded the business immediately after graduation, SGE is often used as role model for University graduates to venture in entrepreneurship and Mr. Mfinanga has been a role model to different SUA Alumni and the General public at large leave alone the publicity which SUA  has continued to receive through Mr. Mfinanga.