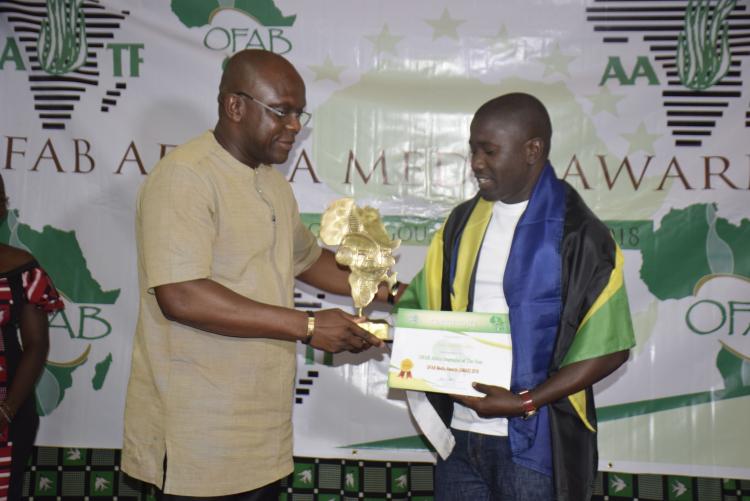 Mr Calvin Edward Gwabara (Right) Receiving OFAB 2018 Journalist of the Year award and certificate from the guest of honor Hon. Remy Dandjinou (Left) who is the Burkina Faso Minister for Communication

The Awards, which took place in Ouagadougou, capital town of Burkina Faso on 14th September 2018 saw Mr Gwabara winning the Television category before emerging the OFAB 2018 Journalist of the Year.

Mr Brian Okinda, a Kenyan journalist, with Daily Nation, won the Print/Online Category whilst Mr Philip Bagyiliku Tengzu, a journalist from Ghana working with Radio Mak in Wa, was adjudged the Best Journalist for the Radio Category of the Awards. Mr Auguste Jean-Yves Nebie of Burkina Faso with the Infos Sciences Culture, Mr Philip Keitany of Kenya with the Kenya Television Network, and Mr Frank Ojufo with Vision FM, Abuja, Nigeria, all emerged first runner ups in the print/online, Television and Radio Categories respectively.

Each of the six winners took home an iPhone and a certificate of recognition each as their prize whilst the remaining finalists from the seven countries were presented with certificates of recognition. The awards ceremony was put together by African Agricultural Technology Foundation (AATF) and its partners in collaboration with the National and Agricultural Research Institute of Burkina Faso.

AATF is proud and honoured to be celebrating journalists and the critical role the media play in promoting evidence based reporting on agriculture based biotechnology”, he said.

Dr Kyetere said the OFAB Media Awards is aimed at recognizing exemplary journalism that promoted best practices in science reporting with emphasis on agriculture biotechnology through responsible, professional, ethical and effective reporting. He said AATF is a non-for-profit organisation that facilitated and promoted partnerships for the access of appropriate agricultural biotechnologies for sustainable use by smallholder farmers in Africa.

Dr Kyetere said the  OFAB project was initiated in 2006 to enhance knowledge sharing of agricultural biotechnology in Africa, stressing that AATF facilitated quality engagement on the benefits of modern Agriculture Biotechnology among shareholders in addressing global challenges like climate change and food insecurity among others.

We believe that journalists have a vital role to play in promoting awareness and the adoption of agriculture biotechnologies, which can greatly improve Africa’s chance of improving food security and the livelihoods of smallholder farmers and economies of the African countries”, he said.

The AATF Executive Director said: “This can be done by adopting favourable policies that support agriculture development for economic growth”.

Mr Daniel Otunge, Project Manager, OFAB, noted that since the creation of the platform in 2006, it has grown to cover seven countries including Kenya, Uganda, Tanzania, Ethiopia, Ghana, Nigeria, and Burkina Faso. He said the unfortunate controversy surrounding biotechnology called for journalists to play a critical role of explaining the technology to the people for their acceptance.

Mr Remy Dandjinou, the Burkina Faso Minister for Communication, commended AATF and its partners for their efforts in promoting technologies that would enable African farmers engage in sustainable agriculture for improved livelihoods.

The journalists attending the ceremony are also participating in a day’s discussion on solution journalism.

We say Congratulation to Mr Calvin Gwabara and the whole SUAMEDIA Team and Management for this huge success.